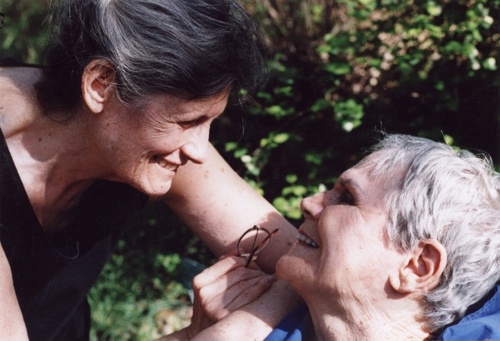 Empathically reflect back the essence of what someone has said so the speaker feels heard, genuinely acknowledged and appreciated. Honouring people's gifts can heal individuals and relationships, unblock stuck places, and get energy flowing again.

Meetings and other group events are set up for participants to express themselves. However, more than just space for expression is needed. If the participants speak without a sense of being heard, they are likely to either amp up their expression (for example repeat or rise in volume) or else shut down (pull back, detach, feel alienated), neither of which is desirable for integration and movement. Mirroring builds trust.

Mirroring may take a variety of forms. Probably the most common is, after several people have spoken, for a facilitator to give a summary of what's been said so far. Another form is to offer a direct paraphrasing back to someone who's just spoken, offering a restatement of the feelings and main points of what was said by that individual. A third form is to "scribe" key points onto a shared display (chalkboard, flipchart, projected computer screen, etc.) that everyone present can view. Or after a general discussion, a synthesized statement may be drafted by one or a few people based on what was said. Mirroring may happen in the moment of a session, or in after/between sessions as part of a longer, iterative process.

Sometimes Mirroring takes something someone said that not everyone in the room understood and translates it into terms that more people can grasp and value.

The effectiveness of Mirroring may be enhanced by checking in with those reflected to see if the Mirroring was accurate.

Not all the Mirroring needs to be done by one central facilitator. A facilitator can also invite others to participate in Mirroring, whether in the whole group or in pairs or small groups.

Mirroring summarizes the state of current knowledge. Once what is now known is acknowledged, that naturally opens up space for new ideas and creativity to emerge, whether for one participant in a meeting or for a group as a whole.

Simple instructions for how to do reflective listening: 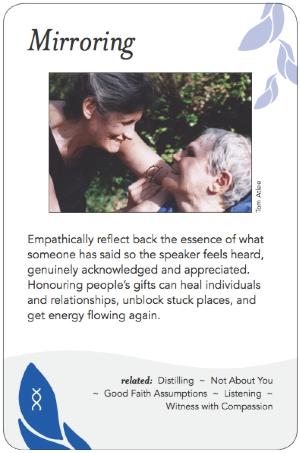