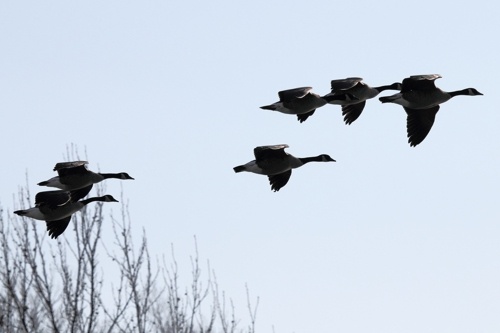 Rotate facilitators. Trade off note-taking. Let a voice at the margin take centre stage. Sharing responsibility increases participation and investment, taps the gifts of all group members, and leads to better results. Nurture equity and empowerment by sharing power, skills, and collective care for the whole.

[this description was written more narrowly focused on sharing roles; needs to be expanded to encompass broader territory of shared leadership]

Levels / Fractal: This can happen from the moment-to-moment shift of facilitation in a meeting, or occur up to the level of major role transition within an organization.

Notes:
- Balance between the culture of an organization and the need to get tasks done – the approach taken in stepping into a role can lead to a graceful acceptance, or resistance.

Note: “Founder Syndrome” is an antipattern to Rolling with Roles.

Note: What's most useful for Facilitators (Process Architects) to consider when designing a process to make rolling with the roles optimal?

Note: Recognize that we take on and put down roles – they are temporary, and needn't become an entrenched part of our personal identity or our persona/worth within the organization.

Note: When roles are shifted more frequently, it helps shift an organization's perspective on roles, and easy of transition.

Note: Inherent in any role should be the notion of how regularly it's shifted. A sense of temporariness is important. A recognition of roles as fluid and temporary.

Note: There is a paradigm shift from viewing a role as an achievement to viewing it as a good fit in the current context.

Note: When a role is seen as an achievement with a certain prestige attached, it can provide both an impetus to do the role well, but also a pressure that can move the role-holder towards burnout in their attempt to affirm their “right” to the role.

Note: An organizational context in which everyone has roles and they transition relatively frequently is an antidote to an “us and them” mentality in regards to organizational power. Rather than an artificial reverence for the role-holders, roles are seen as important but interchangeable and temporary depending on fit.

Note: It's worthwhile examining not just how to make a given role change graceful, but how to create a culture that fosters this sort of ease.

Notes: It would be interesting to explore the use of Theatre and the fluidity of roles in activities such as theatre sport in order to foster a sense of the fluidity in change of organizational roles. 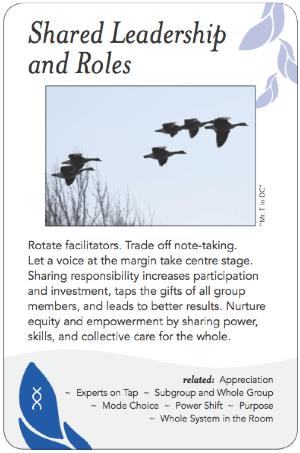