Acknowledgements Upon Publication of the Group Works Deck

Any project of this nature rests on the generosity of a tremendous community of support.  We are grateful to the many volunteers and facilitators who contributed to this collective work.  Without listing everything everyone did, we wanted to take space here to tell a bit of that story.  We’re sure to have missed a few people so we apologize in advance to anyone we’ve left out.

This project has been stewarded to completion by a core team who held a vision and committed to seeing it through.  These first three people made substantial space in their lives to devote to this project for the better part of three years, meeting regularly in person and over the phone and exchanging countless emails, and the fourth joined in the final push to publication.  Together they created a steady center into which others could bring their gifts in turn.

Tree Bressen provided the initial catalyst to make it happen—calling in a circle of everyone she knew (and some she didn’t) to help.  She welcomed each newcomer and held the project space with consummate skill, keeping task aligned with purpose.  She edited every draft and document, and managed the work to keep the entire project moving forward.

Dave Pollard provided a voice from mainstream business to balance our idealism.  Sacrificing many hours of morning sleep, he pioneered most parts of the work, from finding images, to creating the category chart, to writing our core beliefs, to drawing up the first budget.  He took notes on core team calls, graciously hosted us at his beautiful home, and funded travel and accommodations for whoever needed it along with other project expenses.

Sue Woehrlin tenaciously held this project amid a tangle of other commitments, bringing her insight, passion and care to every meeting and phone call.  She facilitated many group sessions, participated in polishing every heart text, considered every possible related pattern, and shared her love of doing dishes.

Daniel Lindenberger brought a thoughtful sensibility to deck and activity development, the phone app, the heart texts, the website, and more, both before and (amazingly) after the birth of his son Ellison; thanks to his partner Aimee Lindenberger too for coming along and supporting these efforts, including suggesting the name Group Works.

Jeremy Lightsmith showed up to one work session to get to know us, went home and wrote the phone app.

Janet Hager did the graphic design.

John Abbe was our lead programmer in Wagn (the software we used to develop this), tech expert on call, and cheerleader for open everything, in addition to participating in multiple work sessions.  Ethan McCutchen (with Lewis Hoffman) developed Wagn and offered us assistance above and beyond the call of duty in using it.  Vine Acorn performed multiple programming tasks on tight deadlines and a bunch of grunt secretarial labour, all with exceeding good cheer.

Over the course of three years, the following people had significant involvement to further this project.  In addition to online work, they participated in multiple 2-3 day work sessions, spending long hours deliberating over patterns, finding the words and images to express them, and many iterations of refining.
Tom Atlee supported our ambition with both vision and on-the-ground labour, including substantial work on related patterns and pattern writing, as well as network contacts and out-of-the-box ideas.
Ted Ernst vigourously supported our image search in content, form, and process, helping move the visuals from good idea to concrete reality, as well as hosting several meetings at his community.
Jim Newcomer brought an editor’s pen along with a willingness to jump in where needed, not to mention his ability to cook a truly superlative omelette.
Dan Doherty put us on track for doing cards instead of a book, doing much of the work of producing the first mock-up deck.
Kathy McGrenera gave her heart to developing heart texts, shared her upbeat attitude at work sessions, and got us to stop working long enough to eat!

These people contributed early ideas, inspiration, encouragement, and other forms of support:
Kaliya Hamlin came to early sessions and spoke for trusting in strong leadership within the community.
Bill Aal came to the first 5-day meeting and got us set up with email lists.
Rosa Zubizarreta offered the very earliest funding, and her gift of nurturing baby shoots of creative offerings to the world.
Chris Corrigan told us people had been talking about doing this project for over a decade and that we were the ones to pull it off, and got us to form a core stewardship team.
Paxus Calta offered early funding and confidence even without being quite sure what the heck it was.
Fergus McLean and others offered friendship and support to Tree through trials small and large, in the belief that this project would make a difference.
Maggie Moore Alexander offered an early blessing from afar and encouraged us toward wholeness.
Ward Cunningham told us that the software we really wanted did not yet exist and not to wait for it, just start.

Amy Lenzo, Nancy White, and Ria Baeck, in addition to other assistance and reinforcement, provided access to their extensive photo archives.  Our sincere thanks to Sara Dent and all the other photographers and illustrators for each of the images.  The bulk of images were taken from Flickr by searching for pictures available for commercial use under Creative Commons license.  Full licensing information is available for each picture online at www.groupworksdeck.org/pictures.

The 6 authors of A Pattern Language—Christopher Alexander, Sara Ishikawa, Murray Silverstein, Max Jacobson, Ingrid Fiksdahl-King, and Shlomo Angel—created a masterwork of enduring inspiration; and midway through our development, the middle four of them spoke at an architecture conference about their relationship with that work in ways we found enormously helpful.

Finally, we thank the community of practitioners and enthusiasts who responded to our preliminary deck in workshops, conferences and meetings while the deck was being developed and tested, and not least, you, as you take this creation out into the world. 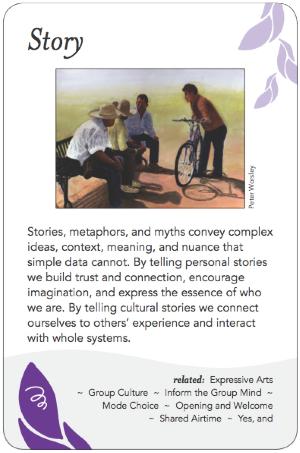