Before there was a 91-card deck called Group Works, there was a profusion of full-scale methods for working with groups large and small:  Way of Council; Open Space; Art of Hosting; World Cafe; Appreciative Inquiry; Future Search; Sociocracy; and dozens more.  The deck aimed to distill the core wisdom underlying the successful application of these methods:  what do they have in common when they are working, when a group really flows?  "Method-mapping" means doing "reverse engineering":  we take the cards and use them as a common vocabulary to explain how each method functions.   If you had to pick 3 or 5 or 10 Group Works cards to explain to someone how your favorite method works, which ones would you choose, and in what order?

At the time of this writing (June 2013), we've held 3 events so far inviting practitioners to join in mapping as many methods as we can cover in about half a day.  The first was held fall 2012 in Seattle prior to the NCDD conference; the second in Berkeley, CA in February 2013; and the third in Vancouver, BC in June 2013.  Both the process and the results have been inspiring and fun.  The full documentation for what was produced is not yet all posted online, but some of it is here.  So far we've experimented with 3 ways of documenting the method maps:

If you want to explore the card-sequencing program, we suggest first reading the Card Sequencing page, and logging in, then going to the actual program.

Update (summer 2016): Cynthia Kurtz has been experimenting with a way of comparing methods using the cards, and has posted a workbook for that activity.

Here are videos from Seattle (fall 2012).  A huge thank you to Nancy White for capturing these maps & narratives and getting them posted to YouTube:

There are more, check them out at the Group Works youtube channel. 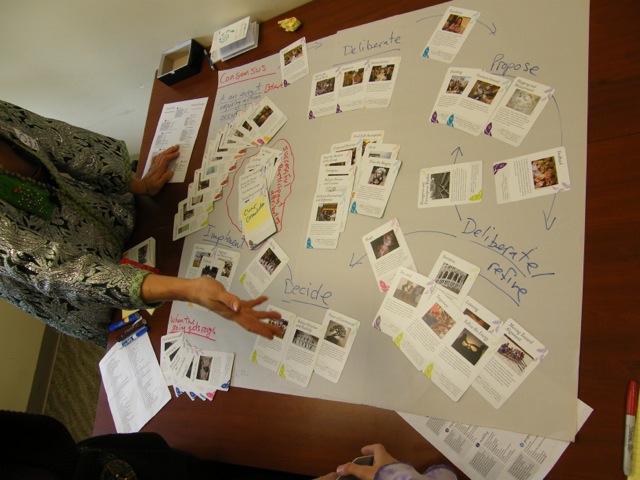 There was much intensity, discovery, and laughter from the thirty of us who assembled at Antioch University in Seattle October 11th, 2012 for the NCDD pre-conference "Method Mapping" workshop.   What happens when you invite practitioners with deep experience in the field, indeed several originators of participatory methodologies, to play with the Group Works deck of group facilitation patterns to "map" essential aspects of different approaches to working with groups?  We learned that whether you were already familiar with the cards or just encountering them for the first time, it didn't take long to become deeply immersed in spirited dialog about the heart and bones of a methodology using the patterns on the cards as the medium.  Through two rounds small groups mapped some 15 methodologies from World Cafe to Restorative Circles, from Collaborative Budgeting to Appreciative Inquiry.

What especially delighted everyone and prompted both insight and laughter was noticing how the teams' process of approaching the task, and resulting maps, reflected the very nature of the method: so the Parliamentary Procedure  group presented in a very orderly fashion and had their selected pattern cards arranged in straight rows; the Consensus group's arrangement of cards was a swirl of coalescing forces and collaboratively spoken; and the Community Weaving group got the whole room participating in their unfolding map! Another group insight was the realization that a still photo of the outcome couldn't begin to capture the richness of the group's "snapshot" of that method.  Instead we learned to record the report outs on video so as to capture the narrative story behind the choice of specific pattern cards that described a methodology.  Reflecting at the end of the session all agreed it was a meaningful and needed dialog to search for a meta language across approaches. 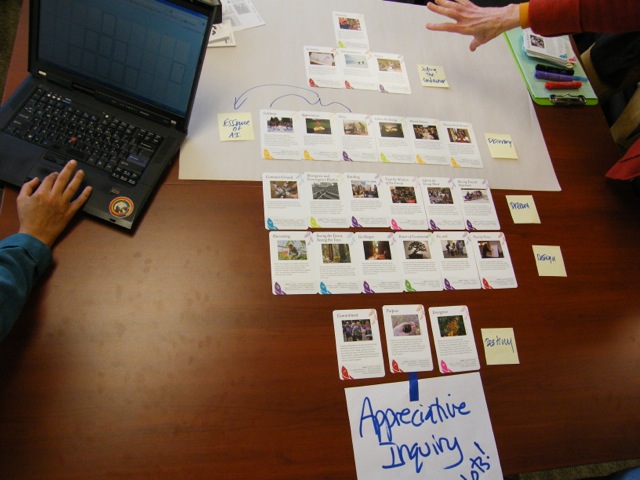